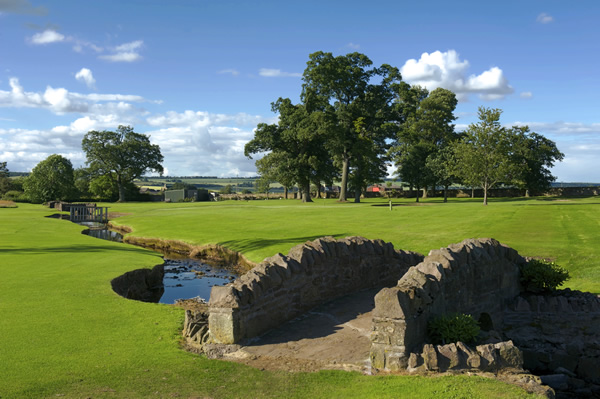 They Are The Champions

Situated below the slopes of the Ochil Hills, the lovely Perthshire village of Dunning is steeped in history, from the Iron Age fort at Dun Knock, through to the 1st Century Roman camp at Kincladie and  a monument commemorating the last witch in Scotland, Maggie Wall, who was burnt in 1657. Add a 17th century St Serf’s church and the famous 9th century Pictish Dupplin Cross and you will be playing golf at one of Scotland’s ancient settlements.

In 1907 a group of local people cut into the hill above the village at Mains of Pitcairns Farm and along the Dunning burn to create 9 holes of golf. Sheep grazed there and it was not uncommon in these early days to have to sweep the sheep droppings off the greens!

In 1946 Lord Rollo of Pitcairn gifted the villagers the Alley Park to be used for all sporting and recreational purposes. It was to be named the Rollo Park. A new committee was formed and at the cost of £3 a plan was drawn up by Joe Anderson of Perth to create 9 holes. After a great deal of hard work, sweat and toil a course was laid out.  Joe Anderson’s daughter Jessie Valentine became one of Britain’s most successful lady golfers between the 30’s and the 60’s.

In 1954 Lord Rollo opened the new clubhouse and is an Honorary President to this day. From these early days the Course has developed into one the finest and most challenging 9 hole courses in central Scotland.
But Dunning’s extensive heritage is a foil for one of Scotland’s most successful and progressive 9 hole golf clubs.  The year of 2010 saw the completion of our new Pavilion, which offers a comfortable welcome for both members and visitors alike.

Victorious Ryder Cup Captain Colin Montgomerie is the village’s most famous resident (and best golfer!) As an Honorary Member of the Club, he has been a frequent visitor over the past few years – opening the Pavilion and holding clinics for the members.

The 9 hole course itself has two sets of Medal tees (Red Ladies and White Gents) for a demanding 18 hole experience and receives regular praise from all visitors for its continued outstanding condition. All the holes are individually named, with many honouring famous local landmarks such as Craig Rossie, Duncrub, St Serf and Maggie Wall’s infamous monument. The Dunning burn meanders through the course providing an additional challenge to this Par 66, 4894 yard course for golfers at all levels.

In the past few years, we have seen an extensive upgrading of the course with new tees, new signage, some new bunkers and the creation of a new practice putting green.

And as part of our ongoing progression, the Club has also established:

We look forward to seeing you soon.